On a large radio station in the oil-rich town of Hoima in the Albertine graben, during a ‘Newspaper’ program, famous journalist Fredrick Akiiki Omuhamba had a statement to make on a live broadcast.

“I looked at things on social media that [we] people who have been vaccinated [against Covid-19] will die after two years, ”he said. It was May 31st.

Mr. Omuhamba, who was broadcasting around 9:40 am on one of the Midwest’s most listened to radio stations, 89.0 Liberty FM, said distressingly and alarmingly, “We’re done.”

After what he heard on the radio that day, Emmanuel Muvunyi, 27, vowed never to take the jab.

“They inject people with the virus. No wonder our cases have increased rapidly since the start of vaccination, ”he said.

At that time, Uganda was littered with a wider array of dangerous new variants, causing new infections and deaths to spike 150%.

Even without proof, the Ugandan unions block and accuse the local media of ganging up with the “government mafias” to scare and detonate propaganda.

“Uganda’s Corona is a scam and it only benefits your corrupt oligarchs. The case here is different and our country has not tasted the real Covid-19 ”, responded Charles Mayanja, a Ugandan based in Dubai, to a report on NTV Uganda.

Countless religious dogmas have also held firm to theories advanced in places of worship – especially to pay attention to science on a microscopic scale, as they say the disease will simply go away.

“Covid-19 is like any other disease but of course overdone. Just pray and one day it will stop, ” says municipal banker Amandah Kisakye, 27.

In addition to the misinformation that has spread, government agencies have been seen struggling to counter and debunk the apparent propaganda on social media.

“It is not true that all health facilities in Kampala are running out of vaccine against Covid-19,” the ministry wrote in response to Conrad Nkutu’s tweet which read: “‘Confirmed by the Ministry of Health : all hospitals in Kampala are exhausted. vaccine.

A coffin pinned with posters calling for the resignation of the Health Ministry PS Diana Atwine (inset) for alleged mismanagement of Covid-19 was left in the middle of the road leading to Mulago Specialist Hospital for Women in Kampala on July 26, 2021. PHOTO / ABUBAKER LUBOWA

A review of the impacts of disinformation and conspiracy theories indicates that they create adherents in a spiral fashion.

It further highlights the unwanted outcomes that information outlets can cause.

“Unfortunately, the people who depend the most on radio in Uganda are those who probably don’t have the sophistication to filter and discern whether the information is accurate,” Professor Chibita noted in an interview.

“It is difficult to recover what people have received. We have to assume that there is a huge potential impact on the population, ”she added.

How did we get here?

“Citizens can put a layer behind the media and not trust information sources such as government officials, religious leaders,” she said.

“Lack of confidence endangers believing in the information and its source,” she also noted of the battle of Covid-19 in Uganda which, in its first wave, was splashed money theft scandals involving government officials.

“The problem is that they set the wrong agenda and shape or drive public debate in a particular direction,” said digital scholar Mr. Bright Mukisa.

Their hoax and conspiracy allegations incite what Mr. Mukisa describes as straying and civil disobedience towards restrictions, policies, SOPs and medical considerations.

it will be very bad

From India, elsewhere and Uganda, mainstream media, microblogging and social networking sites are inundated with stories and images of deaths or survivors linked to Covid-19.

For Mr. Innocent Vuga, 25, who suffered from the disease during the second wave, it is the ultimate way to “shed light on those who think it is a hoax”.

Ambulances line up outside the Kampala Capital City Authority mortuary in Mulago on June 16. More than 17 Covid-19 patients died on the night of June 15 after an oxygen supply system failure at the Mulago National Referral Hospital as the country also struggled with an oxygen crisis. PHOTO / MICHEAL KAKUMIRIZI. PHOTO / MICHAEL KAKUMIRIZI

In another case, three of the 2,800 known deaths from Covid-19 in Uganda (as of August 10) have occurred in Mr John Musiime’s family, forcing a change in attitude.

“My wife and I are sitting on the balcony in mourning. And then, the incessant sounds of ambulance sirens heartbreaking, ”he wrote on Twitter in early June, praising his relatives and friends who had succumbed to the contagion.

As medical workers outnumber patients in a stretched healthcare system and strapped for medical supplies with nearly 600 bedridden Covid-19 victims, Musiime “fears the unmitigated disaster may be very serious.”

The predominant misinformation that also exists through the hoax and conspiracy allegations has recently been spiced up with circulating texts and audiovisuals – suggesting herbal steam preparations as the ideal treatment for Covid-19, but the Organization World Health Organization (WHO) differs.

“It does not cure Covid-19 and it is not a safe treatment because it can cause severe burns. No matter how hot the steam is, it will not reach the virus present in the cells of the infected person, ”warns the WHO.

However, while the WHO advises against the use of items that are not recommended by medical personnel, many attest that some of these herbs and concoctions from various plants help alleviate some of the symptoms.

Out of the Covid-19 treatment center at Namboole Stadium among the 87,700 recoveries in Uganda, Dr Paul Kasigaire said at the end of July: “My treatment included counseling, oxygen support, zinc, vitamin C and ‘azathioprine.’ ‘

“The drug may be different if someone has other underlying health issues like diabetes and pressure,” he noted.

However, Dr Kasigaire admitted that he also relied on the oft-touted mixture of garlic, lemon and hot substances as a Covid-19 cure.

“Pairing of scientists and plants… I think both are important because I have been told to embrace both. Taking prescription drugs helped me recover in just over 10 days, but I completed them, ”he said.

Professor Chibita notes that while addressing the hoax and conspiracy allegations, it is necessary to eagerly understand the source and its motivation.

“Some of it is deliberate and meant to influence people. Maybe there is someone who would benefit if people were not vaccinated,” she said.

In a country where disinformation spreads almost faster than accurate information, receivers have a vital role to play.

“Journalists and social media users should exercise restraint before sharing anything because it has happened to them,” said Prof Chibita.

When asked if the government is communicating strategically on Covid-19 issues, Professor Chibita said: “Covid-19 is a moving target and I don’t think there is a government that is doing everything right. “

However, she urges the authorities to exploit “the room for improvement available in the field of communication”.

“I don’t think strategic communication has really been a priority as the government is dealing with deaths, medical supply shortages and blockages.

“There is a need to go to the grassroots and educate the masses,” she noted, stressing the “need to equip and empower recipients on how to re-examine information before perceiving it as the truth of the Gospel ”.

With several million dollars, some fraudulently, already implemented in the fight against Covid-19 in Uganda, heavily funded by foreign establishments, the country is now reeling from national blockades and international isolation.

“It was sad that all countries that could support developing countries decided to have vaccines,” Permanent Secretary (PS) of the Ministry of Health, Diana Atwine, recently told CNN global news agency. .

“All lives matter, but we live in a world of inequality and we see it in the distribution of vaccines,” added Atwine. 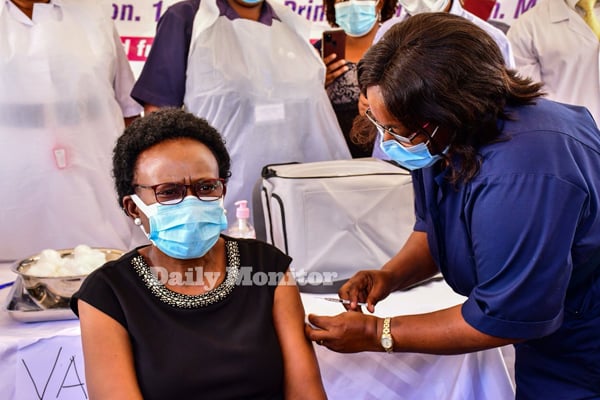 A health worker recently administered the AstraZeneca Covid-19 vaccine to the Minister of Health, Dr Jane Ruth Aceng, at the Mulago Specialist Hospital for Women in Kampala.

Uganda’s efforts against the pandemic remain taunted by misinformation even as the Center for Disease Control and Prevention (CDC) Africa is already sounding an imminent but deadlier third wave of Covid-19 across the continental bloc.

The secret to a long and healthy ...